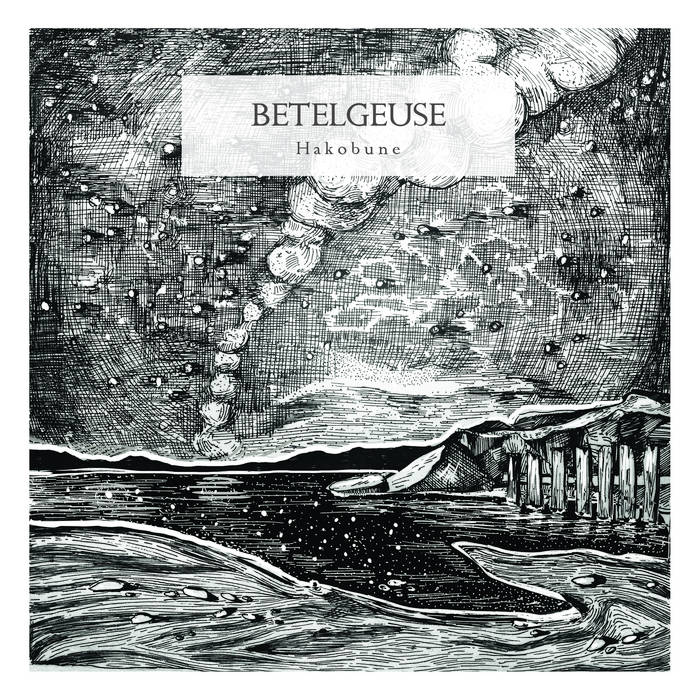 ajatuslapsi Betelgeuse is a haunting 42-minute ambient track. Let it take you on an otherworldly journey beyond the supergiant stars.

V. Mercader I've listened to this piece quite a few number of times since it was released, a year ago today. I remain impressed by the intricate layering of drones and the melodies they create; I will often focus on some sounds and drift away on their path, only to return and pick up a different tune and off I go again. Quite extraordinary, really.

Dotflac A definitive journey towards unknown circular territories, passing flawlessly through the convective currents of a new, yet familiar nebula.

An endless drift on clouds of iridescent matter, condensing fantasies into bubbles of cascading drones exponentially amplifying themselves as the track cycles.

Repelled by the gaping void left behind and driven by the strength of your biggest hopes, you simply understand that your own completion lays in uncharted skies. Away from us, and away from you.

justin spicer If you know who I am (that may be two of you who happen to read this), then you know I love the works of Hakobune. I didn't even need to hear it to know it was great, because Mr.Yorifuji always makes me happy. But I have listened and oh boy, empty your PayPal for this one.

Hakobune, also known as Takahiro Yorifuji uses layers of guitar to create the sonic landscapes. Yorifuji is from a small town in Hyogo, Japan and currently resides in Tokyo.

'Betelgeuse' is a journey to the stars that has no beginning and no end. A new album that consists of 1 track of over 42 minutes long by hakobune that was recorded at Studio Tissue Box in Fukushima in January 2017, and mixed at Home in Tokyo in September 2017.

From the very first second, Betelgeuse feels like it’s been travelling for untold millennia – for aeons – incredibly stable and permanently frozen in time. In fact, the concept of time is disregarded, an alien and unnecessary construct in a vacuum of dark and solo bliss, where light emanates from the glistening music as well as from a dim memory of dead stars. Time has been replaced by nothing more than a glowing melody, but that’s enough. It’s essential, and all that’s needed. That sweet, sustained sound could pass for a single, smooth drone, but it’s more active and more alive than a passive drone. // James Catchpole, A Closer Listen

Hakobune’s ode to one of the night’s more obvious entities encapsulates a portion of this dramatic youthfulness, the elongate drones contained within singing with harmoniously paradoxical lightness. Variations in its strength, subtly waning facets of its textural character, reflect the star’s erratic and variable brightness as it spins rapidly; the juxtaposing crystallinity of the frozen guitar imbibing an ageless and stoic appearance to the casual viewer smoothed out across thousands of generations.

The distance, the size, the brilliance are not lost: for something to be so potent in the dizzying myriad of the entire heavens it must exist on a grand scale. Turn up the music and it doesn’t just twinkle quiescently in the distance, but in fact thrums and heaves and folds and churns, unveiling a complex and evolving character that bends as humans come to scientific realisation. Its true character revealed, the tenuous feeling of the sound becomes almost like a premature obituary, a shining record of a beloved favourite who was lost too soon. See all the lives it touched as it burns up from 600 light years away. // Chris Doherty-Ingram, HearFeel